Welcome to the 36th edition of The Compressed Interview! Today, our guest is Jeff Penny, a composer and sound designer working in game audio. Jeff is very passionate about interactive audio experiences and storytelling through sound and attention to detail.

As a freelance game audio professional, Jeff has contributed work to many incredible projects such as the large-scale games Just Cause 4, and Second Extinction, as well as to smaller, independent productions such as Trek To Yomi, Fourzy, and Heart Fragment. In addition, he has also contributed audio to many films, documentaries, advertisements, interactive installations and more. Over the years, his arrangements have received honors such as a Game Audio Network Guild Award, being selected for Videri String Quartet’s Quarentets competition, and Jason Graves’ Home to Me Remix competition.

Thanks to my friend and mentor Gina Zdanowicz for making this interview possible!

Now, before starting, I want to share that this is the last interview before I make an indefinite pause because I am going through some changes on my personal life. I’ll be moving to a different country; my husband and I expecting a baby and I’m starting some professional projects that will require a lot of time and energy. But I want to thank everyone who has taken the time to read the interview, participate in them or share them. I hope I’ll be back earlier than I think!

Without further delay, this is what Jeff shared with me:

Jeff: Being in some form of audio felt inevitable because music has always been a large part of my life. However, my original plan was to be a music teacher. I was always inspired by my music teachers growing up and wanted to return all the encouragement they gave me to future students. However, while I was working through my degree, I noticed that more and more, the assignments I’d be super excited about, the ones I just couldn’t stop thinking about, were about creating my own music. So, after a lot of deliberation, I eventually decided to switch majors and focus primarily on game audio.

As for my first job, I tend to think of this with two distinct, different answers. While I was still in school, I worked on a few small student and indie games for rev-share, but unfortunately, as is often the case for those types of projects, they never wound up being released. I’m still glad I had those experiences because I learned a lot from them, and am still grateful to have worked on them, but to me they feel distinctly different from the first game I made money from.

I was EXTREMELY fortunate that my first paid gig was working on Just Cause 4. At the time, literally all I knew about getting a job working on games was that I needed to go out and meet people. Then, through some sort of magic I didn’t really understand, jobs would happen. Or at least that was the advice I had always been given. So, I went to a local game audio meetup where I didn’t know a single person, and just started talking to anyone I could muster up the courage to say, “Hello” to. One of them happened to be Zach Abramson. I emailed him a few days later and he invited me to come over and check out the studio he works at, YouTooCanWoo. Then, some time later, he invited me to come help on some tasks getting the music ready for Just Cause 4.

Attack: Things to discuss
Janette: How did you know this was the industry that you wanted to work in?

Jeff: I think there are two parts to my answer here, the medium, and the industry itself.

There was a point in my life where I was sick and couldn’t really leave my house much. It was a really hard time for me because seemingly everything about my future was being derailed, and it really made me struggle with my mental health. However, a big part of what was able to get me through it was playing video games. Then, when I was finally getting to the other side of it, I really wanted to learn how to create those kinds of experiences that meant so much to me, and hopefully help someone else one day.

Once I started going to events, meeting other game developers, and finding out what the community was like, I really fell in love. I met so many incredibly kind and talented people who just made me excited to commit myself to working on games.

They were all so encouraging, and generous with their time, that I just knew it was what felt right for me. 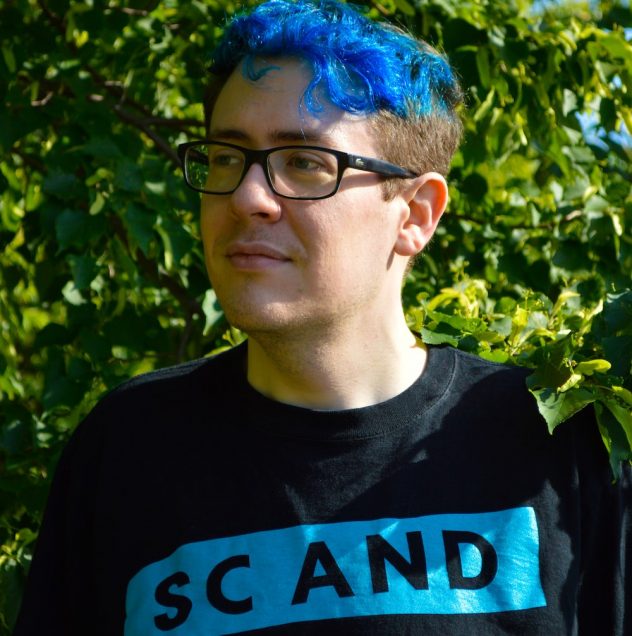 Release: Talking about the good stuff
Janette: What’s the next step in your career? Any project you are working on?

Jeff: Honestly, I have no idea, and that’s both extremely exciting and terrifying all at once. There is no job I have ever worked on that I could have ever predicted until it was already happening. Don’t get me wrong, as an anxious person that scares me to no end, and it keeps me up at night. But at the same time, it makes it so genuinely exciting when a new project does start. I am someone who always loves learning new things and developing new skills. So, it fills me with so much energy to get to explore and understand a new project, and whatever I’ll have to learn to best do my job.

I have plenty of goals and ambitions I’d love to achieve at some point. But I found being open to whatever opportunities present themselves is a much more sustainable and helpful perspective for me to take.

Ratio
Janette: What would you say is the most important thing when doing sound design or composing music?

Jeff: For me, the main answer is just to always do what sounds good. It’s really easy to get caught up in the technical or theoretical minutia. I’ll be so concerned about doing something in a very specific way, that I lose sight of the fact that at the end of the day, I’m just trying to make something that people want to listen to. No one is going to care what ratio I had my compressor set to, or which inner voice leading I chose for some cadence, all that matters is that I am able to convey my message properly. Sometimes it’s too easy to lose sight of that when you are deep in the weeds of the creative process.

The Gain
Janette: What are the biggest life lessons learned in your personal and professional career?

Jeff: I would have to say, to just be a good person. I’m not going to use this time to preach treating others with respect, and compassion because I hope you know that already. I actually think I needed to learn the other side of this coin, which is being a good person to yourself as well. I think with most “creative” fields, it’s really easy to burn yourself out, either through overwork, undervaluing yourself, neglecting your mental health, or some combination of all three. When you are really passionate about something, it’s super easy to throw more of yourself at it than you even have to offer. You just wind up in a deficit of energy and happiness. If you can’t find that balance, it doesn’t matter what skills you have, who you meet, what jobs you have, or anything else, because you just won’t be able to sustain it. That’s why it’s so important to always remember to take care of yourself.

This of course is easier said than done, and I too struggle with it fairly frequently. But I still think it’s the biggest lesson I’ve learned, because it would be the most costly for me to forget.

I hope you enjoyed this interview as much as I did! To get to know more about Jeff and listen to his great work, you can visit his website, find him on Twitter,  Facebook, LinkedIn or Instagram!

Finally, as I mentioned before I want to thank everyone who has made this series of interviews possible! Hopefully, I will be back as soon as possible to continue with this project!