For this edition of The Compressed Interview, I reached out to Sukchan as we both take some courses from the School of Video Game Audio. He agreed to talk to me about his experience in audio and I want to share it with you.

Sukchan is a sound designer, composer, and storyteller with experience in video game and film productions. His credits include Off the Cuf, Whistle, Rusty Spout Rescue Adventure, amongst others, and he is currently working on Brave Eduardo.

S: I started my career as a musician first. I was a rock bassist, then became an electronic pop musician. However, I always wanted to score film music since I believed the film music is the ‘new classic’. So, I started focusing more on film scoring, orchestration, and storytelling. Then, I waited, and waited, and waited more to get a job.

I got my first job, like many other audio people, from my colleagues. One of my composer friends at UCLA Extension asked me to help him finish an episode of a documentary series “Off The Cuf” which explores the world’s most unique, exciting, and often misrepresented communities. I couldn’t say no. That’s what I wanted to have: a first job. Since then, I have been working on that documentary. That led me to a few video game projects where I am working as a composer and a sound designer.

S: I read an article about a film composer saying that he wanted his score not to be remembered. What? At first, I did not get what he was trying to say. I thought the goal of a film composer was to compose the most memorable score. However, he said that the role of film score could be to support the story, and it would be ok that the audience forgot the melody, if they fully empathized while watching the film. That was a turning point for me. Story, empathy, and immersion.

While working in video games, I found myself more creative to give unforgettable experiences to the gamers. Since it’s non-linear, repetitive, I need to consider the layers, dynamics, and randomization. I like to experiment with audio fragments and to find a ‘happy accident’. 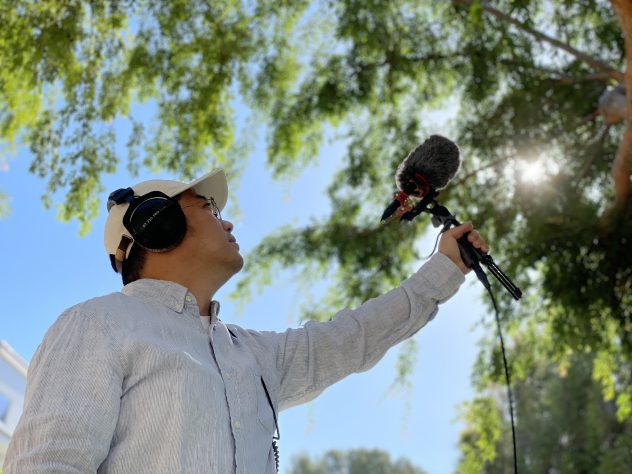 S: I have been freelancing for indie projects. I can meet many people and learn from them. Most of them are friendly, willing to share their stories, and nice to collaborate with. I am about to wrap up a couple of video games (a mobile puzzle game, a PC RPG, a retro arcade game), and a documentary. While working with these developers and directors, I was able to enhance my craft skills, and I got a full-time job starting in August: a PC based action adventure, interactive game. I am very excited to join the new team.

Ratio
J: What would you say is the most important thing when creating sound design or composing music?

S: Story! I always think about the story first. For example, when I design the door opening sound effect, the result can be varied depending not only on the material but also on the context. Such as: ‘Is this horror, thriller, comic or drama?’, ‘Why is the protagonist opening the door?’. These little details can make a huge difference.

Same thing goes with music. Not every action scene needs to be EPIC. It can also be ‘less is more’ or no music at all. One thing I believe is important is to think ‘What if?’ What if I do, or what if I do not. From there I could be more creative.

S: Be a friend. In this industry, in this community, we cannot work alone. Every job needs someone to collaborate with. And if they do not know me, they will not ask me to work with them. It is difficult to be friends with strangers for an introvert like me, but one at the time, I am building my network.

Also, do not hesitate to ask. If I see or find a good sound design and/or score, I try to contact the designer and/or composer. I ask them about their process and their secret sources. Most professionals in the industry are really nice and open to answer the questions. Maybe they can be your friends too!

I hope you liked this interview as much as I did; I found great insights in Sukchan’s experience that I can really relate to, so I hope you do too.

If you want to find out more about Sukchan, you can visit his website, his LinkedIn or Twitter profiles, or his IMDB.

0 comments on “The Compressed Interview #20: Sukchan Lee” Add yours →