For the 31st edition of The Compressed Interview, I had the opportunity to talk to Sam Hughes, a fellow interviewer, who is also a voiceover artist, and an audio designer. Sam hosts a podcast called The Sound Architect and has also been involved in different areas in game audio.

This is what Sam shared with me:

S: OK well this is a long story, so I’ll try and keep it short. I’ve always loved games and game audio, in all its forms, from a very young age. I was obsessed ever since I had a Game Boy aged 5/6. I then started learning the guitar and writing/recording music during my pre-teen years. I was always performing, wanting to voice act specifically, thanks to my love of the kids cartoons and video games I was experiencing.

After University, I tried to find jobs in games, or even how to get a job in games. This was around 2010 though and resources weren’t what they are now. There were barely any games courses, never mind game audio courses.

I would say the main catalyst of “how” I got started in audio, would be via my podcast The Sound Architect. I started it in 2013 to not only share the knowledge of industry people, but also to gain contacts and basically network. This highlighted to me the importance of making personal connections and communication in general. I want to highlight the importance here of being genuine as well. I never condone “fake it til you make it” or having any disingenuous approach when speaking and forming connections with people.

I consider my first main career step to be when I joined Remedy even though it’s recent (2018). Although I’d been working in the industry for a while, this one was a keystone in my journey. It is my first time in house for this long and fully integrating into a AAA studio team. This was when I was 30 by the way, to let people know this can take time and not to worry about how fast they’re getting somewhere.

How I got the job is once again, very unique to my journey. After freelancing and working in the industry, I had returned to the University of York to pursue a PhD in Affect and Emotion Using Immersive Sound Design. As part of this IGGI funded programme, I was required to do an “industry placement”. Through the contacts I had built over many years, I ended up speaking to Remedy and managed to set up a 12 month internship. I was offered a permanent position at the end, where I made the decision to quit my PhD to take this awesome opportunity.

S: As I said before, I adore games. They are the most special entertainment medium that immerses and affects people in such a variety of ways, whose potential we have barely scratched the surface of. I always dreamt of working in the games industry due to this adoration. I enjoy games in all their forms and genres. Whether I personally enjoy them or not, I love critically analyzing what makes them tick, and how they work, not just for audio. I have a huge passion for it as a creative artistic medium in general. I love crafting stories together, working on cool projects and just looking at the game holistically even though I’m an audio specialist.

The more people I met, the more jobs I did, the more it solidified to me, that my heart has and always will lie in the games industry. It has some of the best and coolest people I’ve ever met, and I can’t imagine working in anything else. 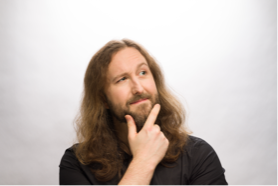 Release: Talking about the good stuff
J: What has been your favorite project to work on and why?

S: OK so for this I will answer two, one for audio design and one for voice acting.

Audio: Control for sure. That was the biggest project of my career so far at that point and I learned an incredible amount in a short space of time. I grew not only as an audio designer, but as a person and a professional astronomically.

VO: Bright Paw. I worked with Radical Forge on this wonderful narrative driven puzzle game about a cat called Theo who uncover the mysteries his bond villain-esque owner, after they are found murdered. I am the sole voice in this game, aside from one small moment, and I narrate the entire experience.

However, without spoilers, for this role I got to explore the most range of performance in one character than I ever had before. I had an amazing relationship with the team already, and this project forged a bond between us that I will never forget. I still miss the weekly script read sessions, that Red and I had throughout the development of the script. I also had the freedom and trust to have input on the script and the performance as the character resonated so close to me and my humor. They genuinely cared about getting the best performance in the best way possible. This is not as common as it should be, as a lot of devs tend to misunderstand how to do this and how to work together with the actors for the greatest performance. What we had with Bright Paw, is something an actor dreams of for a project and is incredibly rare. I will cherish that project forever.

Ratio
J: What would you say is the most important thing when designing audio/doing voice over?

It’s kind of a cliché these days, but unless you educate people on the “why” for how it affects audio, they won’t generally understand. Which is OK, it’s our job to explain how our process works and not assume everyone will know everything. However, it’s also good to make sure that you build a good working relationship, so that you no longer need to remind people about audio etc.

On the voice acting side, I would say seriously focus on your mental health. You should do in any profession, but with this one it can be very tough. Especially when it’s a field with epic competition and saturation, potentially a lot of egos and bad personalities, as well as the constant self-conscious mentality that can come with literally screaming into the abyss. That sounds a bit melo-dramatic I know haha, but when you spend most of your time speaking into a mic (without anyone listening), performing and being vulnerable, putting your emotions on the line etc. it can get tough to maintain strong mental health.

S: That you should trust yourself more, and never judge yourself by another person’s journey. Everyone has their own adventure, taking their own route and their own amount of time.

This didn’t take me much time to be aware of and understand the concept, but it took me a little while to master it. I’m a perfectionist who doesn’t give myself a lot of slack and puts myself under a lot of pressure, like most of us these days. I’ve been focusing on turning that around for years and it honestly just makes you better at your job as well as being much less stressed out.

Also, don’t be afraid of criticism or feedback. Just finish the thing! Then you will know where to go with it if you need.

Hope you enjoyed this interview as much as I did, and we’ll see each other again in a couple of weeks!

0 comments on “The Compressed Interview #31: Sam Hughes” Add yours →