Last week I talked to Vinicio Colin about his experience as a live sound mix engineer and a sound designer, as well as the projects he is working on nowadays. Vinicio has worked on several films and TV series such as the documentary “El año del descubrimiento” (2020), and “Los Fotocopiadores” (2018), and he has also worked on video games such as “Sophie’s Guardian” (2016) and “Attractio” (2015). At the moment he is working on his personal projects in order to create immersive sound experiences as well as in Diario Vivo.

V: This is a lovely story… I come from a low-income family and we had a Fisher Boombox, which my dad decided to give to me as a birthday present. I have always had a wide connection with music… I can recall exactly when I first listened to some songs like Led Zeppelin’s song “Black Dog”. With this present, I had the opportunity to play my own music in my room and it marked my life. Then I discovered that if you played both tapes at the same time, you could mix them. From that moment, my life changed. That’s where I realized that I wanted to work with audio for the rest of my life. I didn’t want to be a DJ, but my first job was assisting a DJ in different places where I lived. Later, I organized the parties and I called my DJ friend and we both played music, we both played in bands, and we earned money, and then I became a DJ.

V: Since at the moment I am changing my perspective regarding my job, I want to talk about this. In my career, at first, I did not have that problem, I was a live sound mix engineer for different bands like Espécimen, but then, I got interested in sound design while playing games at night and that’s when I discovered that you could get creatively blocked. You have to create sounds for things that might not exist… you are in front of a giant blank canvas and you have to discover where to go. For example, for the first monster I created, I used muscle cars speeding up and with the Krotos plugin. Orfeas Boteas and I became friends online when networking on LinkedIn about 10 years ago, and he let me use a beta version of the dehumanizer and that’s what I used and those sounds were approved! So I realized that I couldn’t get creatively blocked and that I should try and try until I got the results that I wanted. I also have great tools to prevent me from getting blocked… I play with cards, do yoga and stretch, I watch TV shows that I normally wouldn’t see, I do disruptive things to keep it interesting and to keep my brain away from burnout.

V: I think that for the most part of my career, my creativity has been in service of other people’s projects… but lately, I am taking control of it in order to apply it to my own projects. I felt the need to create sound and music, to use the studio as a tool as my idols did: Mike Patton, Trent Reznor, George Martin with The Beatles, and all those people who used the studio and sound design to improve their work. So the next step in my career is to develop my creativity as much as possible, it doesn’t matter wherever it takes me. I want to have the freedom of trying to create whatever I want. In particular, I want to create something like a radio soap opera, similar to “La frecuencia Kirlian”, which helped me to land the ideas I had in mind. It will be a terror radio soap opera in which I tell the story of what it meant to grow up in Ecatepec (Mexico), always surrounded by violence. You can’t isolate yourself from violence. It’s about the intrinsic violence in Mexico as a country. Mexico was founded on violence and I believe that we haven’t been able to digest it yet. I really want to dissect violence according to my personal experience and I want this radio soap opera to be like an immersive podcast in which I can share the violence that I have lived, fictionalized, of course, but very well documented and supported by experts in psychology and other disciplines to test that it would be able to help people understand about violence. This project is called “Jacinto Canek”. Jacinto is because my name is Vinicio and having that name in a place like Ecatepec, meant that you would be bullied for sure. So they called me names, and one of those names was Jacinto. Also, I really enjoyed wrestling and I went to the arenas a lot and I believe it’s one of the most inclusive places… it didn’t matter if people were trans, cross-dressers, dwarfs, or whatever, everyone had their own place. Everyone was welcomed and everyone was respected because of their art, without caring who they were or where they came from, and Canek is one of my favorite wrestlers. So I thought of “Jacinto Canek”, who is also a great historical character, and I decided that the main character could be called like that. I could tell a story of violence that might unravel that it’s not always the fault of those who exercise violence… Those are the symbols that I want to show in this project. 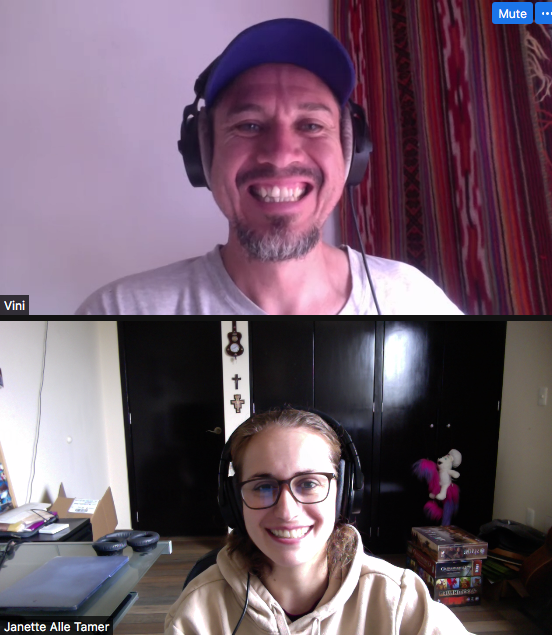 Ratio
J: What would you say is the most important thing when doing sound design?

V: Once one of my best friends, who was also my student (as well as Manuel Montaño’s) said to me: “It’s not because we are very close and you might not be the best sound designer in Mexico, but you are the only one I know” and I started to think why did he say that to me… I realized that we are endangered species in Mexico, and that the industry is not growing a lot. But I also saw that in this industry it’s really important for the people you’re working with to transmit whatever they are expecting from you, so in my opinion that is the most important thing when creating sound. The dialogue between creators and you as a creative sound designer is crucial. They should understand the art of creating sound design, but also know how they explain to you what they are looking for. If they can’t, you, as a sound designer, should help them so the team can work properly.

V: You should always keep learning, and it doesn’t matter how hard work is or how demanding a project is, after everything’s done you always get good memories about the work you did to get through it and to know that the client is satisfied with your work. It’s related to your ego, but it also helps you to keep working on what you like to do. If you really have passion for your job, it will never cease to amaze you, no matter how tired you are, there will always be one project that will make you remember why you love doing what you do.

If you want to see more about Vinicio’s work or get in touch with him, you can visit his IMDB profile, his LinkedIn, or his Soundlister.

0 comments on “The Compressed Interview #18: Vinicio Colín” Add yours →