Yesterday I had the opportunity to talk to Carlos Egas, a technical sound designer with experience in video games, new realities (XR), audio branding, and interactive media. Carlos is now an audio director for Aztech Forgotten Gods (Lienzo). Carlos is also part of a team that is trying to unify and promote game audio professionals in Latin America.

It was a great and short interview, and I hope that you enjoy it as much as I did.

Threshold: Getting Started
J: How do you prepare yourself before starting any project?

C: I like to receive all the material of what is already done in the game; this can vary a lot from project to project. Usually what you always have is the GDD (game design document) so I read it from the beginning to the end. I familiarize myself with the game as much as possible. I ask if they have concept art, character art, character references, or any other details about characters, environments, or any other parameter that is already done. If a grey boxing of the game is available, I like to try it; if they already have a vertical slice, it’s even better so I can have something visual that I can test or check. That’s what I like, knowing the state of the project and receiving the materials according to that state so that I can prepare my work. 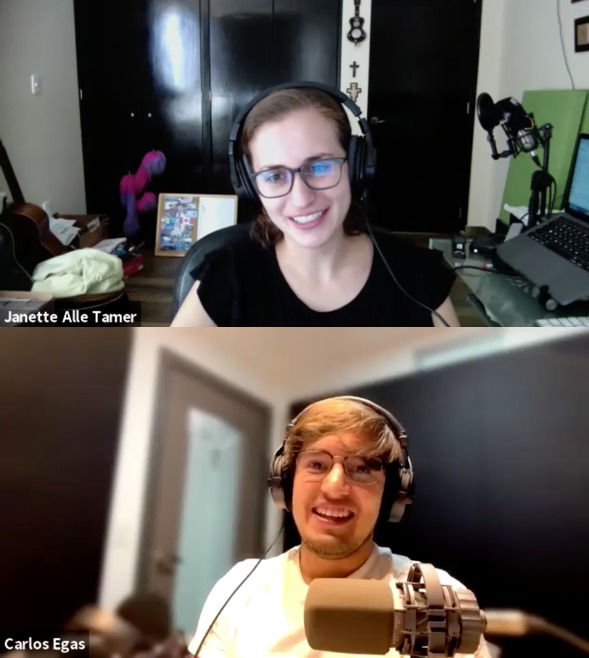 C: I really like this question. One of the things that struck me the most about the master’s degree I did at Berklee was that a professor told us that the best way to overcome a blockage is to work on the same thing that is blocking you. This was very useful to me, because how do I overcome blockage? I think the best way is to try and try, even if it sounds horrible and it is the worst work you have ever done; this will help you get it out. Take the trash out, basically. That way, we take out what is not working, and eventually, you are going to have something that is going to work, that sounds good. I don’t believe that to work you have to feel creative; if that were the case I would work once a week. I make an effort to get it out, even though it’s horrible, I accept it and thus I manage to come up with something that works.

C: I love it because this interview came a bit after it. It was when, with Lienzo, we announced the new Aztech game in the last edition of the Nintendo Indie World Showcase. Being announced by Nintendo, showing our game to the world for the first time, and seeing the positive reactions of the people, for me it was an achievement… to see that a console like this wants to show your game and that people like it. It was a couple of weeks ago and it was huge happiness.

Ratio
J: What would you say is the most important thing when doing technical sound design?

C: Having an open mind and knowing how to learn. I think that the funniest thing about technical sound design is that sometimes I spend more time on Google than actually working on the implementation. You need a giant willingness to learn; many of these processes are not written, especially in technical sound design. It is like entering a jungle of knowledge and learning about techniques, programming, pipelines, etc., and then implementing them within the universe of audio. So for me, the most important thing is to have an openness to learn, a desire to learn, and a lot of communication. You also learn a lot by talking to people who are more experienced, especially the programmers. They are part of the team and you have to learn from them as well.

The Gain
J: What are the biggest lessons you have learned in your personal life and professional career?

C: Even though this is my third-year in-game audio, what I’ve learned is that you have to be very patient and constant. It is a beautiful career, but at the same time, nobody has the formula to know where this path will take you. It’s good to have goals and purposes but you must be willing to go with the flow according to your tools and the context in which you live in. I am in Ecuador and even though there isn’t a game industry here, this is what I got. So, what can I do if I want to work on games? We live in the era of technology and connectivity, so take advantage of the tools you have available, do your best, and hope for the best. Be consistent and be patient. Eventually, if you move forward, meet people, and take part in different communities, the doors begin to open. Following that path will lead you to achieve what you want.

To learn more about Carlos, you can find him on his social media profiles (LinkedIn, Instagram, Twitter). And, to get to know more about Game Audio LATAM, you can visit the website,  join them on Discord, or listen to their podcast.

0 comments on “The Compressed Interview #14: Carlos Egas” Add yours →