For the 21st edition of The Compressed Interview, I had the chance to talk to Anwar Sánchez, who very passionate about music for video games, and has carried out research and adaptations in order to promote video game music in cultural settings for all types of audiences. He currently produces music for video games with independent groups from Japan under the label “Anwar Studio” and produces a radio project about video game music called “Del Bit a la Orquesta”.

Anwar has been part of great projects related to video game music in Japan and in Mexico. This is what we talked about:

A: I studied music in Mexico in “Fundación Musical Yamaha”, it’s not very renowned, the courses it has are considered as extracurricular, but as soon as I finished with a basic course, I realized that there were many studies I could make in that same institution. I specialized in an instrument called Electone, an electronic organ, which had a lot of qualities that reminded me of the sounds of the Super Nintendo. I studied the electone’s hardware and realized it had a lot of similarities with the sounds processors of the game consoles at that time. So, I decided to specialize in the Electone, and then I saw that there were more courses in Japan. There was a competition to go and study a professional pedagogical training of that instrument and its technique.

Around the year 2000, I was able to go to Japan to study and that’s where I had my first contact with video games. At that time, I have just started composing and I wasn’t very immersed in the game world, until I went to a concert of an orchestra in Tokyo, and they played video games music. It was an instant click, I understood that I wanted to work in it, and get the word around in Mexico. So when I got back to Mexico that was my intention… I started looking for places where music for video games was being made, but I did not find any, so I started looking for an alternative. That’s how I started doing music for exhibitions and galleries.

In 2002, I did my social service in the Science and Arts Museum, and that’s as close as I got to doing something similar to video games. My first job was an exhibition of art inspired in Músorgski. I created the music for the pictorial exhibition. And, it was until the year 2005 when I found a studio that was creating music for games… Nusoft Studios in Pachuca, Hidalgo, which at that time was directed by Daniel Borrego.  We competed in the second edition of the national video game development contest in Mexico, organized by IGDA, Electronic Gaming Show, and Prosoft and we got a second place in the category for professionals. Since then, it became my passion. In those years, many projects were not consolidated, they didn’t have payments, and there were tough times, so I went back to Japan to get immersed in independent game projects that worked with people that weren’t from their culture and I was able to work with different studios and to learn about the Japanese game culture. 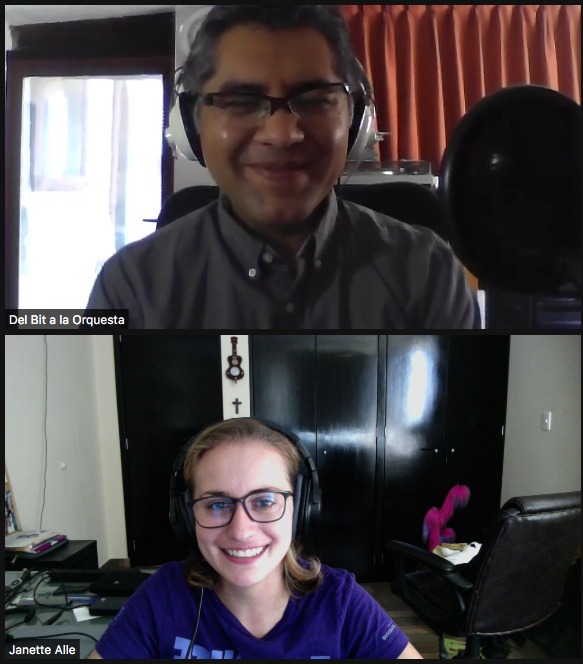 Attack: Things to discuss
J: What’s the biggest challenge you have encountered, professionally speaking and how did you get around it?

A: As I was telling in the earlier questions, I have encountered some challenges here in Mexico. And as I mentioned, that concert blew me away, so I directed my professional career towards adapting video game music for orchestras. In 2012, I participated in the devHR event in Mexico. We organized a concert for the closing of the event, with different orchestras, such as Orquesta Sinfónica Juvenil Carlos Chávez, Orquesta Filarmónica de Jalisco, and Orquesta Filarmónica de la Ciudad de México with the help of the hosts of this event and government culture office in the country. In this concert, they interpreted video games music and movie soundtracks.

It was a great challenge for me since some of these orchestras haven’t played much of video game music. Creating and getting the material was very complex. I did found some sheet music in the United States, but I have to get the performance rights according to the type of event, etc. I really admire Koichi Sugiyama, and I was able to get performance right for some Dragon Quest’s themes.

Also, I had to adapt different themes for the orchestra for the intro, which was a video game music medley, and also for the closing. It was a great experience, very laborious, especially because rehearsal times are short and there needs to be a lot of communication with the orchestra director so he can guide the musicians and transmit the feelings that the composer intended. Something that I have learned from Koichi Sugiyama is that execution might not be so hard, but the feeling to execute the music is. Each time it is played, the execution is different. I believe that the best execution was when these three orchestras played together.

A: In 2012, I started a project called “Del Bit a la Orquesta”, as a preamble of the realization of the devHR concert I mentioned earlier. I have seen that in Mexico, there is no promotion of this type of events, not as a show, but something that could be admired as culture. At that time, there weren’t many jobs related to video game music, and especially about its analysis and what the composers intended to share through their music. I started investigating and I went to events in Japan mainly. For me, the most memorable one was Press Start: Symphony of Games, a series of concerts that concluded in 2014. But this event was complemented with a project called 2083, which is an association formed by musicians and composers that has an objective that by the year 2083, video game music will be catalogued in the classical music repertoires. The name of the association is because the year 2083 will be the centenary of when the console Famicom came out.

I really wanted to know more about this association, so after the concert, I saw a table in which I was able to get information and I was invited to join. This was very important to me since that’s how I started with the investigation that I am still doing at the moment. This association is also committed to share the events and all that’s happening around video game music, not only in Japan, but also around the world. At that time, I was the first member outside of Japan and it was also interesting to them.

Thanks to that association I have been able to take part in different events, such as the Tokyo Game Music (音楽Ongaku) Show, which is like the Tokyo Game Show but focused only in music, where I was able to interview important musicians, such as Hideki Sakamoto, and Noriyuki Iwadare. So I used those events and moments to gather information for the project “Del Bit a la Orquesta”. That was the most memorable moment in my career. It was a phenomenal concert where the orchestral arrangements stood out, as well as the music quality, and that’s the idea of that association, to show that this music could be considered as avant-garde music or academy music.

The association is still active, even though it’s been hard with the pandemic. They had a printed newsletter, which is only available digitally now, but it shows statistics about the average of video game music events in Japan. Until 2015, there were around 300 events per year. This newsletter and this association gather together those events to have a register about this type of events. Also, my wife and I, created the Mexican section, The Bit Magazine, it’s in Japanese, but it has the main intention, to register video game music events in Mexico, and I send it to Japan, so they also register this information over there.

A: For me, the feelings are the most important thing to consider. I lay theory aside, and let my brain create music. I talk to the developers so they can give me as much information about the video game context, the ambiences, and the characters mainly, in order to create a profile in my head about what I am going to compose. If it’s music of a character, I try to understand how that character acts and thinks, things that might be irrelevant, but can make sense in a musical profile.

Later, I use theory to adapt what I created. A philosophical concept that I learned in Japan is that everything has a soul, and considering that you can transmit feelings through music. In music everything is very ethereal or very intangible, but in the end it stimulates your feelings. So I go on that basis, I create and then I adjust using theory.

A: To have order and to be constant… Be relentless with your projects. Ever since I first got in touch with video game music, I have been doing things related to it: orchestral concerts, my investigations, and my radio project. When I realized that there is not much diffusion about the value that video game music has, I started the project “Del Bit a la Orquesta”, and it has grown positively, it now has a space in FM radio here in Santiago de Querétaro. At first, I thought it was something that might not get a lot of attention, but we have been broadcasting the program for 4 years now and the public is not gamer. That was also my intention, I directed the content towards people that have no notion about this type of music in order to show them that there’s something they can consider getting involved in the future so the industry grows.

Something that fascinates me when I go to concerts in Japan is that the public is not only gamers… I can see elderly, music students, and different types of people. That’s what I want to achieve here in Mexico, to get people that have no notion around video game music to be interested in it. I have achieved it through my radio program and the public is hooked with the content.

If you want to know more about Anwar, his research and his projects, you can find him on his Twitter, listen to his podcast on Spotify, his blog, or his Facebook page.

0 comments on “The Compressed Interview #21: Anwar Sánchez” Add yours →